From June 25th to 29th, 2021 we were locked in a Heat Wave. Record breaking daytime temperatures in BC that (for us) were 34-38 degrees Celsius, with the humidex taking us into the mid 40C range. There was little relief through the night with temperatures higher than what our normal daytime would have been. The sweltering temperatures were due to what climatologists call a “heat dome” – a strong ridge of high pressure that traps warm air underneath it like a dome, allowing the sun to bake the earth below, creating a heat wave that lingers for days. So from cold, wet Juneuary to sweltering, record breaking heat, it has been quite a month for the record books!

The first few days I wasn't prepared well enough to keep the chickens cool. We have never experienced temperatures that high in our 31 years on Denman. The chicken run is in a partial shaded area but the afternoon sun just baked them. They were panting with their wings held away from their bodies even in the shade. By afternoon the thermometer inside the Ritz reached 110F. After a day of that, I put up their rain tarps but it was still too hot so out came the old bed sheets and panels from the old greenhouse. It looked like a shantytown but it worked to keep most of their enclosure in the shade. In the evenings I took in the hose and wet down the yard hoping to bring the temperature down a bit with the cold water. They have an old kiddie pool with sand for dust bathing so I poured in a pail of cool water and the older birds were in immediately cooling their feet in the mud. I tried ice cubes to cool their drinking water, only to see them melt before my eyes. So I started freezing big ice blocks in stainless steel bowls to float in their water dishes. Also at night I put a block of ice in each house when the birds were closed in, hoping again, to reduce the temperature a bit inside. In the heat of the afternoon I froze a larger stainless steel bowl with some cooked rice, diced frozen vegetables, old berries from the freezer and other vegetable and herb scraps. The big frozen blob freaked them out at first but once Buffy realized there were blueberries in that frozen blob she was pecking and getting a nice cold treat along with being entertained.
The garden and greenhouse were another story... I hung burlap along the south side of the greenhouse and put in a fan to blow the heat through. Everything is thriving but I watered every morning and evening for an hour or so. From the wet, cold early June, I still had the burlap on the ground around the garden boxes and hoops over the beds. The hoops were used to suspend burlap, double remay and shade cloth over the delicate or newly seeded beds. One bed that isn't doing well are the strawberries, I didn't shade them and in hindsight I think that might have helped. The fantastic picking I got in my last Blog post is no longer. The berries are small and some either shriveled and dry or have white, burn marks on them. The only good thing is that they become more food to put in the chickens fruit and veg frozen treat!Today our temperature is bearable, everyone is more comfortable and we can have the house windows open again. There is a breeze off the ocean and we can see the Coastal mountains again so the haze of pollution is blowing out a bit. I have continued with the watering and making ice blocks for the chickens. Our local News has said, "welcome to the new normal of climate change" ... we have never used the air conditioning of the heat pump but finally on day three I was tired of toughing it with just fans. Even though the dogs were groomed short, they were having a hard time in the heat, so we all appreciated the cooler house. It did cross my mind to find a way to bring the chickens into the cool house ... but I think that was just the heat getting to me.

Most of BC broke temperature records for the month of June and also broke all time records for heat. I don't look forward to this experience every summer but at least this was a learning experience of how to keep everyone here safe and healthy in the extreme heat.

A Home Garden for Food Security

Cheery Crocus and Narcissus With the explosion of Covid-19 and a World Health Emergency, we must learn to live a new normal. I've h... 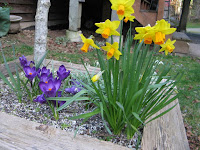