Whole30 ~ For The Health Of It

I recently had a consultation with a Functional Medicine Practitioner. My personalized prescription started with a Paleo style, whole organic foods, AIP (Autoimmune Protocol) diet. For 30 days, the guidelines followed are easily found through "Whole30". I learned how some of my favorite foods are having a negative impact; creating chronic inflammation, low energy levels, digestive issues and chronic pain without even realizing it.

This protocol does require effort; grocery shopping, meal planning, dining out, discipline ... it comes down to taking responsibility for your plan and learning to say 'No, thank you'. YOU make the choice to eat something healthy, to commit 100% for the full 30 days. *"The plan eliminates the most common craving-inducing, inflammatory, blood-sugar disrupting, gut damaging food groups for a full month. The 30 days are required to break bad habits and stop unhealthy cravings ... to let your body heal and recover from whatever effects those foods may be causing ... and push the reset button with your health, habits and relationship with food."
Read Labels!!
I was shocked to find hidden sugar, sulphites and grains in many of my favorite condiments. My pantry is now re-stocked and Whole30 compliant with ... Spectrum Organic Balsamic Vinegar of Modena (natural occurring sulphites is Whole30 compliant), Red Boat Fish Sauce (no sugar, just anchovies and salt), Coconut Aminos to replace soy sauce, Maison Orphée Organic Raw Dijon Mustard, Primal Kitchen Real Mayonnaise with avocado oil, organic coconut milk and cream and Chosen Foods cold pressed naturally refined Avocado Oil for all cooking and high heat applications. Avocado oil has health benefits similar to olive oil, and a high smoke point (260̊ C or 500̊ F). At its smoke point, an oil begins to break down producing toxins and trans fats that can have a foul odor and taste and are toxic to our body.

For years I have not eaten nightshades; potatoes, tomatoes, eggplant and peppers, they trigger my arthritis. With recent health concerns, I have been eating a totally grain free diet since May 2017, no grain of any kind including all rice and corn. The Whole30 plan has also eliminated all dairy, sugar (including stevia, a bit shocking but I now understand WHY), legumes, alcohol, carrageenan, MSG, sulphites, baking, junk food and treats. There are a few exceptions to the rule, so it's best to check out the Whole30 site. I found their 'tough love' section very helpful. *"It's not hard" ... *"It's only 30 days and it's for the most important health cause on earth--the only physical body you will ever have in this lifetime."

The recipe below started out with a need for something I could have on hand for any meal of the day and take on the ferry for a quick, healthy snack or lunch. It has morphed into one of my favorite foods; crunchy yet creamy, filling and healthy, with options to make it into a complete meal by adding olives, avocado slices or hard boiled eggs.
I hope you enjoy it as much as I do!

Kale Salad with Avocado/Lemon Dressing   Yield: 4-6 servings
Crunchy yet creamy, even on the third day in the fridge! Turn this salad into a more complete meal by adding olives, avocado slices and/or sliced hard boiled egg.

Wash and dry the kale, remove and compost heavy stems, julienne slice leaves thinly. Place in a large bowl with 1 Tbsp. each lemon juice and olive oil. Massage the kale until softened. Set aside and make the dressing.

To make the dressing; in a small food processor, combine all dressing ingredients until smooth, set aside.

For the salad; wash, trim and cut all remaining vegetables, add to softened kale and toss to combine. The dressing will be thick, spoon over salad and 'rub' into ingredients with a silicone spatula or the back of a spoon. Continue to rub and fold the dressing into the salad until combined.
For a more complete meal, serve with olives, sliced avocados and/or hardboiled eggs.
Till next time ... in good health and Bon Appétit! 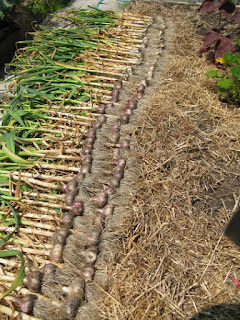