With Halloween just around the corner, here's an idea... recycle your jack-o-lanterns into pumpkin purée for my favorite 'Pumpkin Pecan Loaf' recipe. Only use your jack-o-lantern for purée if it was freshly carved the day prior, and outside only a few hours for Halloween night. Be sure to clean the inside of the pumpkin for any charred flesh or bugs before roasting!

To make fresh pumpkin (or winter squash) purée;
Preheat oven to 400F and brush a bake sheet lightly with oil. Cut pumpkin in half and scoop out the seeds and strings. Place pumpkin, cut sides down on the prepared bake sheet. Bake until the flesh is soft when pierced with a fork, about 45 minutes to an hour. Remove from the oven and let cool.
Scoop out the flesh into a food processor, purée until smooth, then transfer to a cheesecloth lined sieve placed over a large bowl. Allow to drain for 30 minutes before using. Cover and refrigerate for up to 5 days or freeze in airtight containers for up to one year.
*Chef's Tip: If you are making soup, use the drained pumpkin juice for all or part of the liquid called for in the recipe.

I used kabocha squash purée for my Pecan Loaves this time. The squash flesh was dense, sweet and smooth but the loaves took an extra 15 minutes to bake through. It is important to remember in baking that timing is affected by many different factors. The accurate 'test of doneness' is done with a toothpick or cake tester, inserted into the center of a loaf or cake. When it comes out clean, the cake is done.

*More Substitutes: I have used organic spelt flour instead of unbleached flour and organic palm sugar in place of granulated sugar in this recipe with success.

*Chef's Tip: In commercial bakeries, batters are made in very large batches. To portion batter, a weigh scale is used for each cake. The pan and batter are weighed together, this produces each loaf or cake the same size and therefore they bake in the same timing. If you have a scale and 2 identical loaf pans this is an easy task and results in equal baking time and equal size of the loaves.

Pumpkin gives a rich color, distinctive flavor and delicious moisture to this easy quick bread. This is a great recipe to use up some of that pumpkin purée you froze last fall!

Preheat the oven to 350°F. Grease or parchment line two 9x5x3-inch loaf pans.
Stir together flour, soda, salt, cinnamon, nutmeg, ginger and allspice; set aside.
Combine sugar, pumpkin, oil, water and eggs in the large bowl of an electric mixer, set on medium speed. Gradually add flour mixture, mix well. Stir in raisins and pecans.
Pour batter evenly into prepared pans. Bake 1 hour or until the loaf tests done. (*Remember, when I used squash purée my loaves needed 1½ hours to cook through. Test with a cake tester before removing from the oven.)
Cool for 10 minutes in the pans set on cooling racks, then remove from pans and thoroughly cool on racks.

*Chef's Note: These loaves freeze well. I wrap each slice individually in plastic wrap, then put in a large freezer bag. Quick and easy to pack for the ferry or to use in school lunches!

What is a Cooking Oil 'Smoke Point'?

In cooking terminology; the 'smoke point' of an oil or fat is the temperature when heated, where a bluish smoke becomes visible. Every cooking fat be it butter, lard or oil has a smoke point.

To produce an oil with a high smoke point; manufacturers use refinement processes like bleaching, filtering and high temperature heating to extract and eliminate the extraneous compounds. This produces a neutral flavored oil with a longer shelf life and a higher smoke point.

Traditionally, oils are extracted from nuts and seeds through mechanical crushing and pressing. If bottled immediately, these are cold-pressed, raw or 'virgin' oils. This unrefined oil is packed with enzymes, minerals and compounds that don't respond well to heat. They retain their natural flavor and color but are also susceptible to rancidity. These oils are best for drizzling, dressings and low temperature cooking.

Now, when it comes to cooking with fats; a flavorful, raw oil or pool of butter that is smoking is a danger zone! When heated past its smoke point, fats start to break down releasing free radicals and a substance called acrolein, the chemical that gives burned foods their acrid flavor and aroma. Another side effect is the fat degrades, it gets closer to its flash point, producing ignitable gasses that you don't want hovering over an open flame. That said, if your oil starts to smoke, unless you are using a high smoke point oil, carefully remove it from the heat immediately. Once it has cooled, give it a sniff and taste and if it has developed unpalatable flavors, discard it and start with a new batch.

For high temperature cooking use fats with a smoke point at or above 400F. Methods of high temperature cooking include; pan searing where the fat is heated until it just starts smoking before adding the meat, deep-frying where the smoke point of the fat should be at least 50 degrees higher than your frying temperature and stir-frying with a wok where a thin layer of smoking hot oil is used to lubricate the food and brown it while retaining a crisp, fresh crunch.

The higher a fat's smoke point, the more versatile use in different cooking methods. A few other things to watch out for... hitting a smoke point further lowers that smoke point. This means that if your deep-frying fat has been smoking, you will not be able to successfully reuse it as many times. Refrigerate flavorful oils like sesame, avocado and walnut to delay rancidity. Store oils tightly sealed in a cool, dark place. Do not keep oil over the stove, the extra heat can lead to rapid rancidity.

Till next week ... Bon Appétit!

Seedlings that are grown on windowsills, under lights or in greenhouses have soft stems and tender leaves. They have to be 'hardened ... 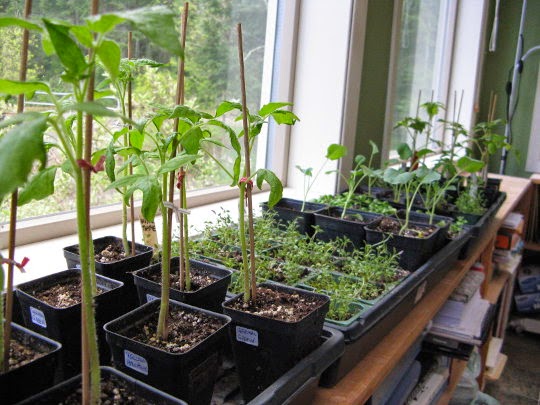